We will not go gently into the night…
1914
post-template-default,single,single-post,postid-1914,single-format-standard,eltd-core-1.1.3,borderland-theme-ver-2.3,ajax_fade,page_not_loaded,smooth_scroll,paspartu_enabled,paspartu_on_top_fixed,paspartu_on_bottom_fixed, vertical_menu_with_scroll,wpb-js-composer js-comp-ver-6.7.0,vc_responsive 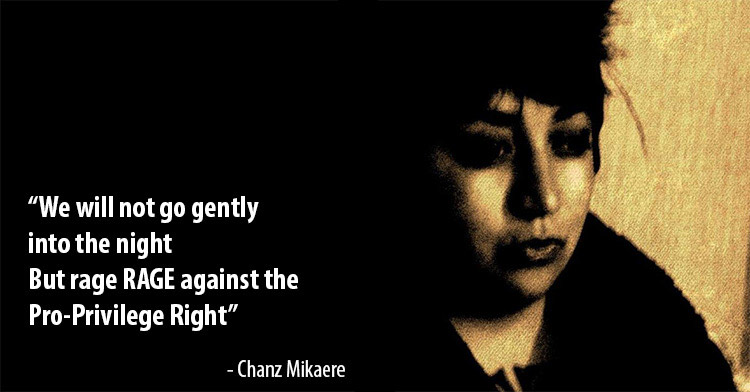 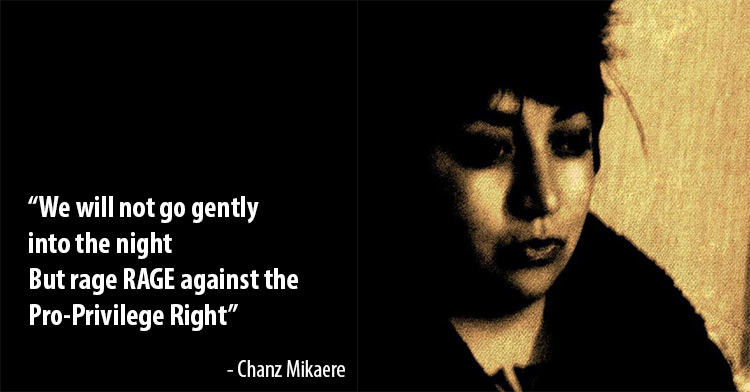 The final day of the public submissions are being held at the Rotorua Lakes Council on the proposed Te Arawa Partnership model.

Visual artist, warrior poet Chanz Mikaere offered her own submission which was reflective, insightful and powerful while being respectful of sensitive ears, kupu kino were excluded from the verbal submission but included below (you have been warned).

This is the full-text of what she presented:

Ki a koutou nga Councillors, I get your position, I really can
You’ve inherited a legacy of “not giving a damn’
From the LMA to the RMA, waaay back to the Treaty
We’re in it together darlings, time to get meaty!
The entitlement and arrogance of the Pro Dems OPTION 5,
Had me laughing so hard, I thought, is this Saturday Night LIVE?
I understand your position but have no pity

Come aboard the waka, be resolute
Commit to the future, a vision shared
Not shake in your boots full of fear
Democracy is won between the sheets,
It relies on ignorance to deliver defeats

You come, you hui, you say you consult
When shit goes down, it’s the hapus fault?

By your imposed “consent”, our resources are milked
With an overwhelming dose of reversed cultural guilt
We’re still here you fullas, this is the solution!

The Partnership a start in a Just Revolution
The Fenton Agreement is the example of our generous spirit
Visionary then as a semi respectful conduit
Not surprisingly, our generosity has been systematically used
Good faith has led to our Mana being abused

You’ve taken want you want and pretty much cruised
It’s why this relationship is flawed, we’re bruised
Democracy is a religion that has failed the poor
But that’s not your concern is it, coz you still want more!
Homogenise my whakapapa, for a Crown Natural Grouping
Scraping the barrel mate, how low are you’re stoopin

You see, not “all Maowris are the same”

Some of us have your number and know the game
And there are those of us from this actual land
So to your Pro Democracy, your insolence I backhand!
We’re only here because you made a mistake
The Environment court slapped you in the face

You felt that in your pockets, an expensive silly stunt,

We Rage RAGE against the Pro Privilege Right

You see, I’ve unloaded my bullets as a sign of good faith
Though every instinct tells me to keep one tucked away,
This bridge of our backs is not for your whipping,
Your pollution, feigned ignorance or total stripping
Of our rights to protect our ancestral lands

From your five finger discount grabbing hands
I can’t even take my girl to her own lake to swim
It’s stagnant and paru, thanks to you crims,
Your bores affected our way of life, our baths too

Too busy taking, Whakarewarewa screwed
The same went for when we lived in Ohinemutu
You sucked our ngawha blood, Putea hungry Kutu!
The relationship as it stands is problematic
You STILL want more stuff, it’s “White Noise”: static

For some of you I have no sympathy at all,
That’s right I mean YOU, the KORETAKE FOUR
Shallow thin lipped greetings from you, if any
The impact of your racism now heard by many
You sit there scared shitless that this taniwha will bite

Push my people far enough, we just might…
Whet my tongue with a taste, distinctly stale
As Aunty Merepeka once described it, “Male and Pale”
You are surprisingly lucky we are being so nice
You can still be eaten with Horopito spice

Boiled in Parekohuruhuru
A hakari, a treat, classic case of Utu.
You call it a threat? I term it cuisine
Still a possibility, but I’m not that keen
Some flavours can’t be rinsed from my waha
I’d save my hunger for an adversary with more kaha!

I hope you were actually fair when choosing a counting system
And didn’t pick the cheapest to simply “Miss them”
That if our format doesn’t match yours, you count a “No”
I’d check every single submission before you crow
Don’t be lazy, slack or typically cheap

Fark this up and you’ll deserve what you reap
Give us accurate results on that final decision
Or I’ll be back on a personal mission
Bullets loaded, I’m already sussed!
What have your actions shown me that I can trust?

Ka aroha to you, there will be no melodic hymns
Just a truckload of resistance to your colonising whims
We get tokenism, petulance and constant abuse
Stand up for our whakapapa and get labelled obtuse?

Your ungrateful moaning and ignorance are gross
Coz it’s niggling at you, what you fear most
You’re terrified, we niggas might just wake up!
Uprise, take back our swag and say “Chur, diyups”

Even now, with much trepidation
My skin crawls at the thought of participation
I look around this room, and think, do you deserve
To have these taonga, what cries have they heard?
These token tukutuku on your walls?
What have they heard? How many calls?

From my people for Justice? For equal stakes?
Met by deaf ears and sentiments fake
A child with many hapu affiliations
I’ll not be another victim of assimilation

My whakapapa? My birthright. It’s what I breathe
It’s why I stand here in good steed
Some say “buy you out”, others say breed!

Me? I’d evict you for intergenerational greed

I pray this not be another crappy joke
We’ve had enough of being your native poke
Manaakitanga said Maggie: and said Guide Rangi!
Not the prostitution of our cultural Honey
Dial a Karakia? Dial a Pohiri?

The token gestures are over -KOKIRI!

While you stick your ure in my hangi pie
Over Maori Redress, you Kehas cry!
This Arawa asks “he aha ai?”
You pay less in fines and less in rates

Too controversial, because I don’t bluff
I paint flaccid ure, kupu snipe and weave Muff

Not a single Arts officer has been from here
Considering the stakes, that’s hardly fair
It’s why there are cock ups with vapid exhibitions

You’ve seen my style of Protest, the media crucifixions
You called the show “Whakapapa”, so what’s in that name?
Your colonised fear of genitalia exposed your shame!
A complete lack of understanding of our people and the struggle

Your process lacked magic, disconnected Muggles
I’m part of the steering committee for Rotorua Arts
To make sure you know you place and do not impart
A model upon my people’s creative legacy
Te Arawa will determine our own artistic destiny

You’ve forgotten to thank your gracious hosts
For we have given you everything, well, almost, lol

Don’t like it? Bei, take your crap and leave

Papatuanuku and Hinenui will accept you too
When your thin lips are a cold and pallid blue
No more private decisions, no more agendas hidden
No more poisoning of my lakes or blankets flea ridden
The Te Arawa Partnership will take us far

Didn’t you know? Some of my best friends are Pakeha!
This process will humble you, and empower us
It’s why I have bothered to even make fuss

The coloniser is fallible after all
From great heights, come massive falls
If we were playing Game of Thrones,

I’d bend you over, and you’d get OWNED

Waipa dumpings into the Puarenga, where I once would Penny Dive
Have poisoned my whanau, we’ve lost to cancer, many lives
Then there’s the good ol’ Eastern Arterial Route,
You’ll destroy our urupa for an early commute

Ironically, your dead rest with ours, on our hill
And my people’s chance for justice, you still try to kill
Katniss has her arrow, and all the Hollywood hype

Me? My eyes are locked on you, set in my snipers sights
I’ll be deep into this kaupapa and support the Partnership
Keeping an eye on the players and stirrers of shit
For now, I will pocket my pen and quench my voice,